May Artist of the Month 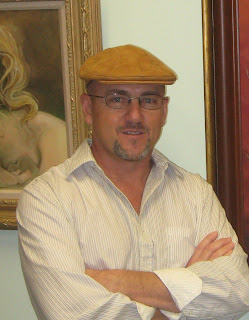 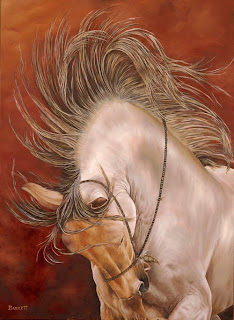 For our second Artist of the Month the name that was drawn out of the bag was Wayne Barrett. Wayne's paintings are a favorite and it's great to share some information about Wayne. So without any further delay, here's Wayne Barrett's Artist of the Month interview:
Question: First, tell us a little bit about yourself, affiliations, personal stuff.
Wayne: I was born in California, I am happily married, a father of three, and grandfather of two. I served in the Navy and the Army so I actually have two Honorable Discharges.
Question: Apart from creating art what do you do?
Wayne: Other than painting, I am also a musician. I play guitar, piano, and specialize on harmonica. I played with a blues band in California for a couple of yeas in the late 90's.
Question: What first made you want to become an artist?
Wayne: I have been into art longer than I can remember. I actually got a blue ribbon as young as Kindergarten. I read a lot of comics when I was young and discovered the work of Frank Frazetta. It was his work that first inspired me to become an artist.
Question: Describe your creative process.
Wayne: I'm not sure that I really have a creative process. The majority of my work comes from my head. I'm a dreamer, a fantasizer, so it seems I always have hundreds of ideas. For me it's a matter of weeding through those ideas for something to lay down on canvas.
Question: Top five books, movies, songs, groups, websites
Wayne: Books: Lord of the Rings, Grapes of Wrath, The Dark Tower series, The Crystal Cave, Crime and Punishment; Movies: Forrest Gump, One Flew Over the Cuckoo's Nest, The Godfather, Dances With Wolves, As Good As It Gets
Question: In 10 years I'd like to be...
Wayne: In 10 years I would like to be much more educated in the art world so that I can better sell and exhibit my work.
Wayne thanks so much for the interview!!!
Posted by Butterfly Farm Pottery at 6:03 AM No comments: